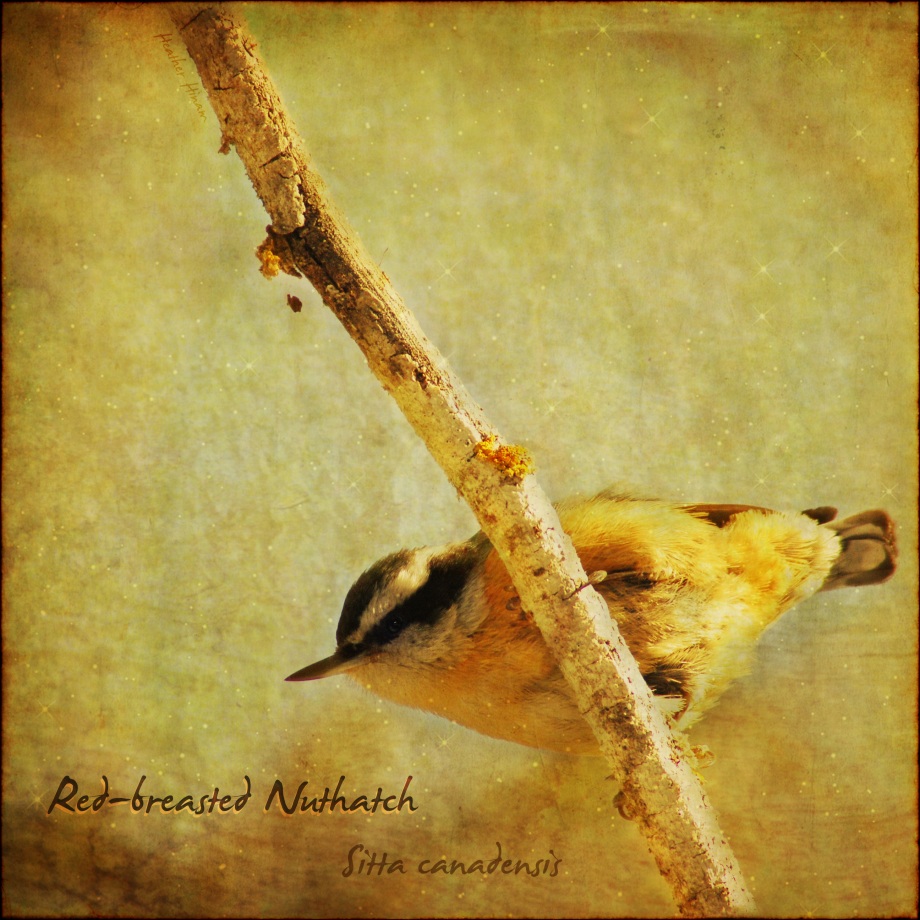 Although winter just doesn’t seem to want to relinquish its grip around here, I’m still noticing the subtle signs of spring.

Bit by bit, the forest is beginning to come alive again, starting with the birds. Not a lot of songbirds stick around to brave a northern winter, but we have a few residents and they like to get an early start on things.

One of them is the Red Breasted Nuthatch. These little guys brighten my day even in the coldest stretches of winter. Their nasal ‘ank, ank, ank’ is toneless music to my ears, whether in the stillness of a frigid January morning or cutting through the cacophony of a spring dawn. They may not be the most melodic of songbirds, but I never get tired of hearing them, mainly because there’s so much character behind that voice.

Red-breasted Nuthatches are tiny, weighing in at a mere 8-13 g (about the same as 75¢ in quarters), but they pack an enormous amount of energy into that little fluffy body. I don’t think I’ve ever seen one sit still for more than a few seconds. They’re always on the move, bopping their way along branches and down tree trunks, searching for grubs and other insects hiding in the bark.

These birds actually evolved specifically to exploit this very unique niche. Nuthatches are designed to walk upside-down. Their backwards-facing toe has an elongated claw that hooks into the bark, anchoring the bird in its acrobatic pursuits. By inching their way down the tree, nutchatches manage to find the insects that other birds, like woodpeckers and creepers, miss working their way up.

Their boundless energy comes in handy for more than just foraging. They’re also one of the only hole-nesting songbirds to excavate their own nest. Just like a miniature woodpecker, little nuthatches drill their way into the wood, craving out a nest large enough to hold both adults and an average of 5 young. Although, nest building is usually the female’s job, with her mate bringing her snacks now and then, un-mated males will sometimes drill multiple nests at once in an effort to entice a female through house shopping.

I was lucky enough to find two nuthatch nests last spring. Once you spot them, they’re pretty easily identified by their sticky welcome mat. Adult birds line both the inside and outside of the entrance with globs of spruce and balsam sap, serving as a line of defence against insects and parasites that might want to find their way into the nest. Mom and Dad avoid getting stuck by shooting straight in and out of the hole. It’s really quite fun to watch.

However, my favourite thing about red-breasted nuthatches is their personality. For such a little bird, they can fill an entire forest with their presence. They’re always easy to spot in mixed feeding flocks, chasing off the larger chickadees and even jays while they stuff their beaks with seeds.

They are also very inquisitive and can also be tamed, though 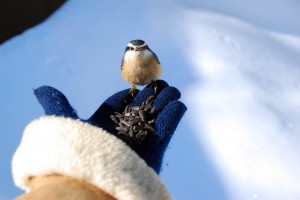 admittedly not as easily as chickadees. Still, I was fortunate to have one little female ‘adopt’ me as her personal feeder. ‘Squeaky’ became quite brazen after a while, landing on my shoulder as soon as I’d stepped out the door, wandering around my back and searching for the pocket that always held a bag of sunflower seeds. For two winters, I would look forward to her endless chatter as she came hurtling out of the trees like a feathered bullet, heading straight for my hand, often before it had any food in it.

Unfortunately, like most small songbirds, nuthatches aren’t especially long-lived. Squeaky disappeared after a few years and while I still have plenty of her relatives fluttering around my yard, I have yet to find another one quite like her.  I’m hopeful, however, and always keep a bag of seeds in my pocket, just in case. 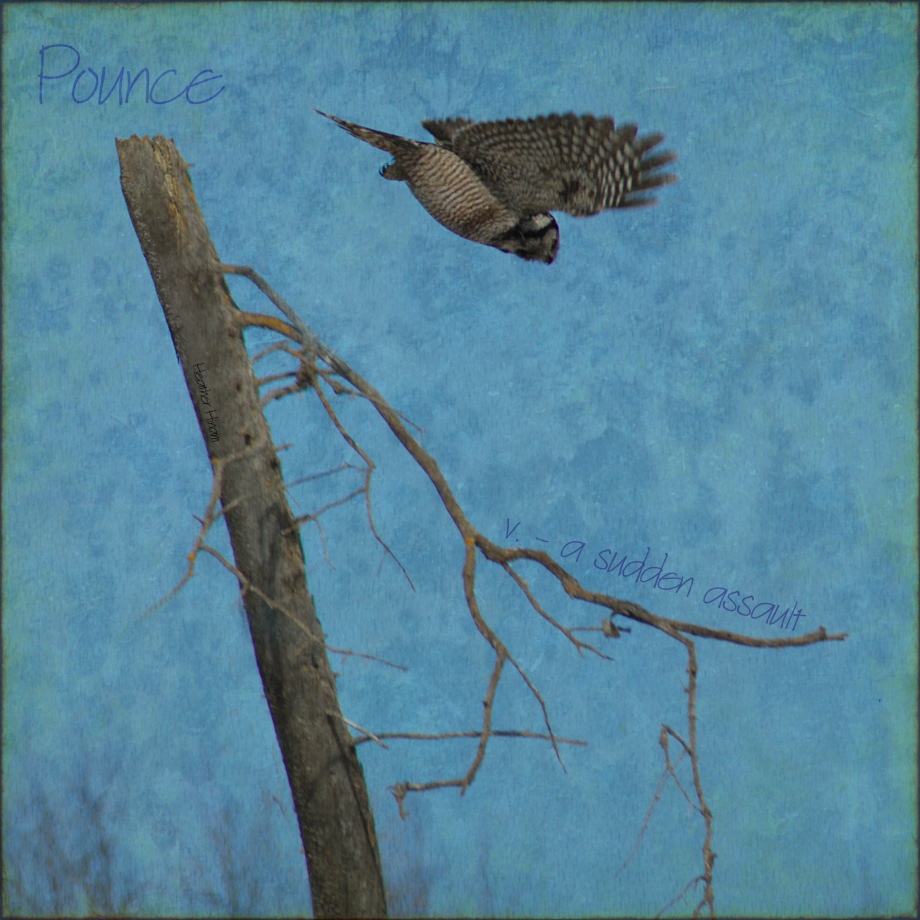 We’re heading into owl season around here, my favourite times of year. Of course, after nearly 15 years chasing these denizens of the dark around in the forest, I may be a little biased.

Actually, as soon as the snow blankets the ground, I go into owling mode, scanning tree tops and hydro poles for distinctive silhouettes. This heightened awareness comes from the knowledge that winter and early spring are the best times to spot one of the more unique members of the Order Strigiformes.

I’m referring to the Northern Hawk-owl (Surnia ulula). Their name alone suggests that they may be something a little different. They’re actually quite aptly-named. Unlike most of their fluffy, almost stocky cousins, these smallish owls are really quite streamlined, with relatively small heads, long tails and slightly more narrow wings. They’re also diurnal, hunting during the day, instead of exploiting the darkness like most other owls.

In the winter, these little stealth bombers come out into the open, perching high on the tops of spruce trees or old snags, sweeping the area with their eyes and ears, searching for scurrying rodents. Their sharp-eyed gaze can spot a vole bouncing over the snow up to 800 m away. When they find one, watching them pounce is a sight to behold. Most owls are relatively slow flyers, almost floating to a stop over their prey before they plunge to the ground for the final kill.

Hawk-owls are another matter. They usually don’t slow down. If the vole is on the surface of the snow, they don’t stop at all, snagging the morsel on the wing and swooping up to a perch to settle in with their kill. Their flight patterns are actually more like that of a Goshawk or a Cooper’s Hawk and that, coupled with their daytime habits, likely led to their common name.

These unusual birds are one of the least-studied of northern owls. Most of what we know about them comes from studies done in Scandinavian countries, where banders have worked diligently for decades to understand their owl populations. Here in North America, only about a dozen nests have been studied extensively.  The fact is that they’re hard to work with. Although you can spot them with a fair bit of regularity during the winter, hawk-owls disappear into the bogs and old burns to breed during the spring and summer months, making them hard to find, right at that period in their natural history that we want most to understand.

What we do know is that they like tree cavities for nests, laying their eggs in old woodpecker holes or burnt-out snags.  Like their northern neighbours, the Great Gray Owl and Boreal Owls, their reproductive success and thus their population numbers are likely tied to the cycling abundance of their rodent prey. Indeed, every now and then, large numbers of these birds will wing their way south out of their normal range in search of food, stirring southern birder populations into a frenzy. Still, we don’t really understand the mechanisms that drive them yet.

The scientist in me abhors this unknown and wants to work up a study and dive right into fray, teasing out patterns from the apparent chaos. However the writer in me likes that there are still mysteries left in our world.